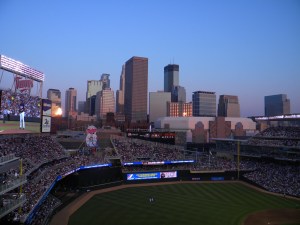 Okay, I just need to start by saying, losing to Cleveland is
unacceptable.  They are the last place team in our division, and we now
have lost two games to them.  It makes me ill.  I don’t think tonight
that our starting pitching was bad.  Sure, I would have like Slowey to
go further into the game, but he was looking tired at the end of his
5.2 innings, and 99 pitches.  After having a short outing of only 3
innings last time, I’m not surprised that he looked tired toward the
end tonight.  Overall, I’m quite pleased with how he did, and
ultimately it was in fact our bullpen that lost this game for us.  (No, I’m not saying anything bad about Jesse Crain and that fluke of a hit that scored 2 runs)

I’m quite happy about the roster move the Twins made yesterday after
the game.  I think all of us fans have been waiting for Slama to get a
nod this whole season!  He deserves it, and really, can he do any worse
than the rest of the ‘pen has?  I know that he’s gotta step up and be
outstanding, or else he is going to get ripped apart by the fans.
That’s a lot of pressure for him, so hopefully he is oblivious to all
of this pressure and just is the bad *** that he’s been in Triple-A
this season.

So during the torturous game that was last night’s game, I got bored
and started thinking about what the Twins players would be doing if
they weren’t baseball players.  Here’s the jobs that I’ve came up with
so far for the boys:

Michael Cuddyer – Magician (if you haven’t seen his card trick, check out my video of it on You Tube here: Cuddy The Magician.
Kevin Slowey – Motivational Speaker
Timmy (Scott) Baker – Angel (check out his head shot for this, with me in the pic) 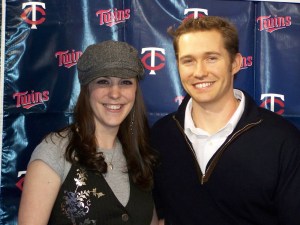 Orlando Hudson – Actor.  He acts a lot when he’s playing baseball, so I think he’d be good at it.
JJ Hardy – Country Singer.  For some reason, I can see him being good at this.
Nick Punto – Stripper.
Denard Span – Televangelist.  He already thanks Jesus when he gets on base.
Matty Guerrier and Nick Blackburn – Semi Truck drivers.  It’s a toss up who’s ‘stache puts them in the lead for this job. 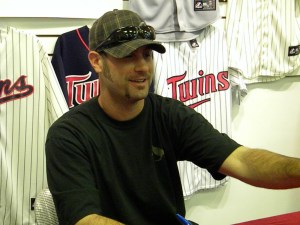 Joe Mauer – Chippendale Dancer.  I think he’s got the white boy dance moves down, plus a lot of ladies think he’s pretty.
Jeff Manship – Superman/Clark Kent.  Come on, he looks like him, right??
Jon Rauch – Basketball Player (I know, this is kind of lame)
Justin Morneau – Canadian Mountie

As talks about trades continue, I wonder if the Twins will make any
moves that will make any of us fans happy.  In the past, Bill Smith and
co. do not have the highest track record with making moves that
everyone else seems to think are the most obvious issues that need to
be addressed.  I guess this year, I’m hoping for help in the bullpen.
Yes, I know our starting pitchers have left something to be desired,
but I think and have faith that there is still some hope for them.  I
know that this means it’ll come with some hard times and some losses,
but I know the Twins and their love to come from behind late in the
season and surprise the hell out of all of the competitors.